Havana had a system to protect from the attacks of pirates; this included fortified walls and forts placed strategically around the old city.

This is the largest preserved segment of the old wall; Muralla de la Habana.  Note at the center a map of old Havana 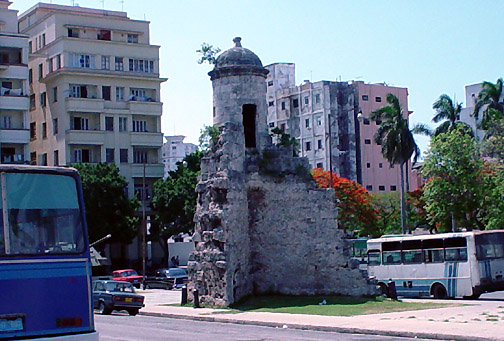 Here you see another portion of the wall that was built around Havana to protect it from pirate attacks.  In those days, the gates were closed at 9pm.

The most well-known of all the forts, El Morro.

One of the El Morro cannons known as  "The Twelve Apostles" (Los Doce Apóstoles), although not as many remains nowadays.

Close up of the lighthouse at El Morro

El fortin de la Chorrera was originally outside of the city of old Havana, but due to growth of the city now is at the center of Havana, at the end of Almendares river

Castillo de la Fuerza as viewed from the other side.  Atop the tower is seen "La Giraldilla" considered to be the symbol of Havana.